How to follow the third round of the Le Mans Virtual Series by Motorsport Games, kicking off this weekend on November 13 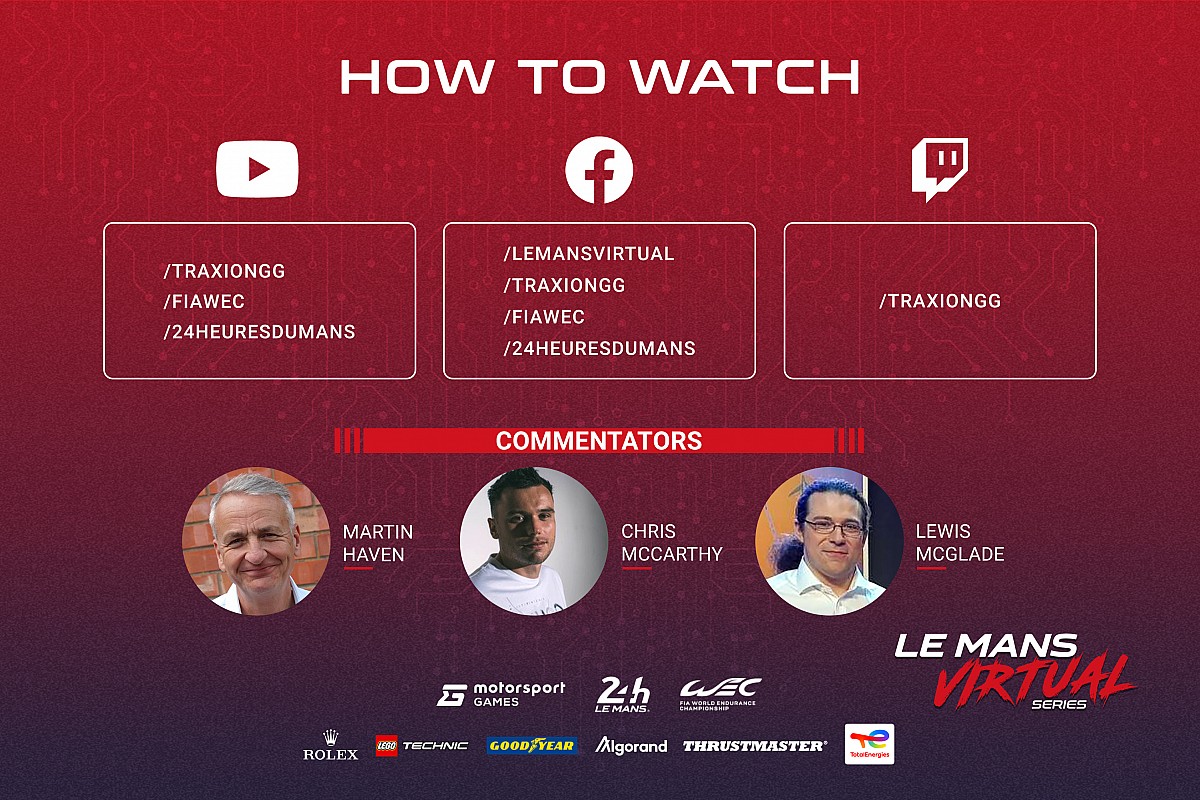 After an action-packed first two rounds, drivers will take on the long challenge of Nordschleife on Saturday at 7:30 a.m. ET.

MIAMI, FL – November 12, 2021 – The 8 Hours of Nürburgring takes place this weekend, which will be the longest race of the Le Mans Virtual Series to date. Le Mans Virtual Series is a joint venture between Motorsport Games and the Automobile Club de l’Ouest. The third of five rounds for the 2021-22 season, which will come to an end with the 24 Hours of Le Mans Virtual in January of 2022, will be the biggest challenge yet for the 114 professional and sim racing drivers participating across the 38 prototypes and GTE entries (entry list HERE) on the famously difficult 21 km/13 mile Nordschleife circuit in Germany. With over 100 corners, dramatic climbs and drops, blind crests, and a little run-off area, the circuit can easily catch out even the most experienced drivers, so viewers can expect plenty of action.

The live broadcast will feature lead commentary by the voice of the FIA World Endurance Championship, Martin Haven, together with Chris McCarthy and Lewis McGlade. Coverage will begin at 07:30 am ET on November 13. Full details of how to follow and tune in to the broadcast and all the action is detailed in the visual above and information below.

The first two rounds of the esports world’s top endurance racing championship were action-packed, with close and unpredictable racing in both the LMP and GTE categories. The No.4 Floyd ByKolles Burst entry currently holds a narrow two-point lead at the top of the LMP standings. However, Spa winner No.123 Team Redline and its star driver lineup, including Felix Rosenqvist (INDYCAR) and Bono Huis (2021 rFactor2 Formula Pro Series champion) will be pushing hard for a second consecutive victory. Chasing them close behind is the No.22 GPX Rebellion Williams, which this weekend sees Williams F1 reserve driver Jack Aitken in its line-up. In the GTE category, it is even closer, with the No.91 Porsche Esports Team and the No.71 BMW Team Redline both tied at the head of the standings following one win and one second-place finish each. The Aston Martin, Corvette, and Ferrari entries will all be battling for more points this weekend and this class is likely to be as fiercely contested as ever.

The Le Mans Virtual Series brings together top-level real-life drivers, such as Jenson Button, Alex Palou, Stoffel Vandoorne, and Louis Deletraz, and some of the world’s best sim racers to compete together in five endurance races. Each race lasts between four and 24 hours in duration,  concluding with the 24 Hours of Le Mans Virtual, which will take place live at the Autosport International show in Birmingham, the UK in January 2022.

The races may be followed, live and uninterrupted, on the following schedule:

Le Mans Virtual Series is a global, elite esports series made up of five rounds that bring together endurance racing and sim racing’ top teams to compete on some of the world’s most famous racetracks. International FIA-licensed real-world drivers are teamed up with leading esports protagonists to take on endurance classics for a total prize fund of US$250,000, culminating in the prestigious 24 Hours of Le Mans Virtual which will take place live and televised at the Autosport Show International at the Birmingham NEC (UK). The Le Mans Virtual Series is a joint venture between leading racing game developer, publisher, and esports ecosystem provider of official motorsport racing series throughout the world, Motorsport Games, and the Automobile Club de l’Ouest (ACO) - the creator and organizer of the world-famous 24 Hours of Le Mans and promoter of the FIA World Endurance Championship (FIA WEC). www.lemansvirtual.com

Motorsport Games, a Motorsport Network company, combines innovative and engaging video games with exciting esports competitions and content for racing fans and gamers around the globe. The Company is the officially licensed video game developer and publisher for iconic motorsport racing series, including NASCAR, INDYCAR, 24 Hours of Le Mans, and the British Touring Car Championship (“BTCC”), across PC, PlayStation, Xbox, Nintendo Switch, and mobile. Motorsport Games is an award-winning esports partner of choice for 24 Hours of Le Mans, Formula E, BTCC, the FIA World Rallycross Championship, and the eNASCAR Heat Pro League, among others. For more information about Motorsport Games, visit www.motorsportgames.com