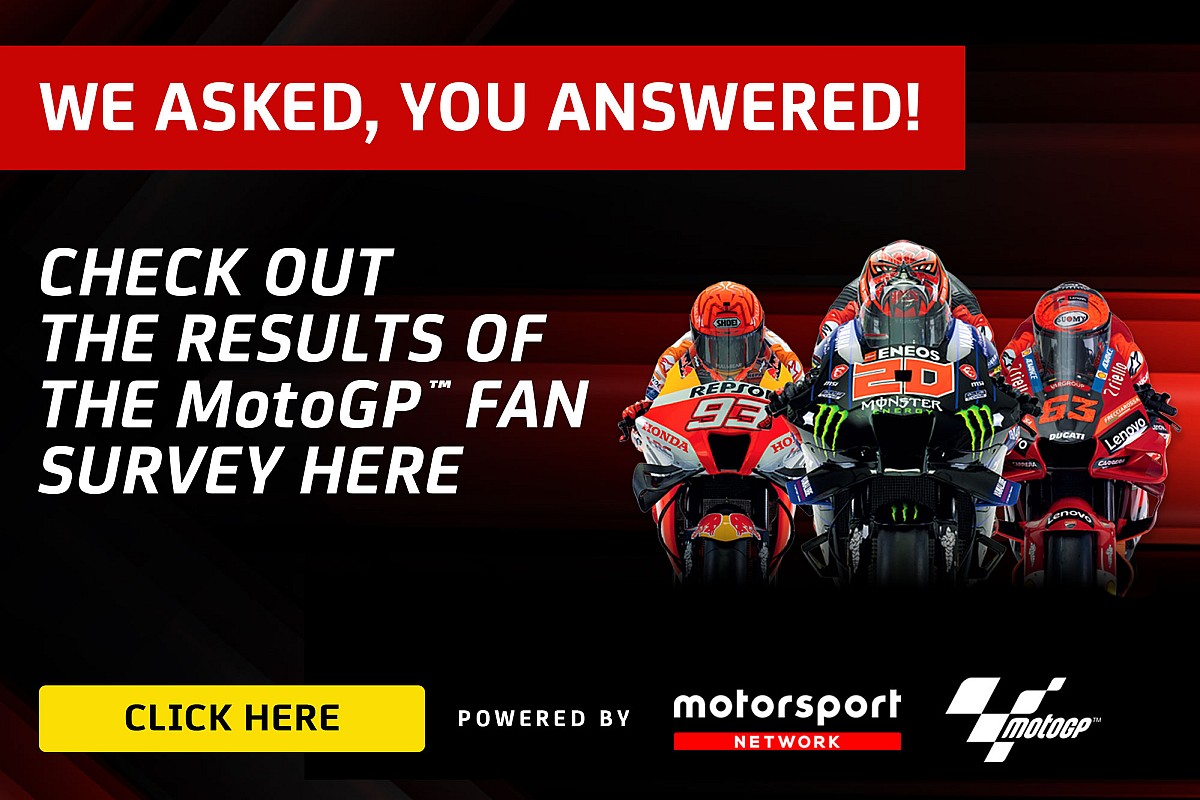 Misano, Italy (September 1, 2022) –Dorna Sports S.L and Motorsport Network today announced the key findings of the 2022 Global MotoGP™ Fan Survey. Launched in June, the Global MotoGP™ Fan Survey was commissioned by MotoGP™, hosted and managed by Motorsport Network, and analyzed by Nielsen Sports, the global information, data, and measurement experts. Conducted in 14 languages across the Motorsport.com platforms and receiving feedback from 109,676 fans in 179 countries, it is by far the largest fan survey ever conducted in MotoGP™.

The results show that MotoGP™ has built a very loyal fanbase, with over 82% of fans following the sport for over six years, the highest of any series studied in Motorsport Network’s Global Fan Survey program, and more than 82% of fans watch more than 15 races each season. Fans invested a total of 27,300 hours completing the survey, taking an average of nearly 15 minutes each.

The data show MotoGP™ is attracting new female fans, one-third of whom have been following the sport for less than five years. Female respondents were also significantly younger than their male counterparts, with 56% of female fans aged 16-34, compared to 40% of male fans. However, a significant percentage (66%) of fans believe that the sport needs to do more to attract new fans.

Carmelo Ezpeleta, CEO of Dorna Sports: “The Global MotoGP™ Fan Survey, undertaken in partnership with Motorsport Network, has been true to its name with over 109,000 fans from 179 countries investing their time. We couldn’t be more proud of that response, nor of many of the answers they’ve given. We have a truly global and passionate fanbase. Put simply, we asked, and our fans delivered.

We are proud to see fans are so positive about our racing, and they support the important initiatives we already have underway, such as the beginning of our new global era of zero-carbon fuels in 2027. We are also delighted to see such committed interest from key demographics, such as the increasing – and dedicated – female fanbase for MotoGP™. We aim to open the doors to our sport as wide as possible, on track with the Road to MotoGP™ program and off track as we continue our mission to grow the sport across all audiences and countries around the world.

We’re especially happy because the results show clear potential and give us targets we can use to define our next steps as we aim to make the sport even bigger. Everything we’ve learned will be invaluable in the decisions and directions we take going forward."

Italy, France, the UK, Spain, and the USA lead the way in responses. The European audience made up 65% of the total, with 19% from Asia and 13% from the Americas.  MotoGP™ enjoys a very loyal audience, especially in the Europe and Asia-Pacific regions, where over 65% of fans have been following the sport for more than 10 years and over 80% for six years or more.

Reigning world champion Fabio Quartararo was voted the most popular MotoGP™ rider by 21.8% of all fans. The Frenchman featured in the top three of nearly half (49%) of all fans, rising to 56% among female fans. His support is highest among female fans and those aged 16-34.

Marc Marquez is the second most popular rider. Although he only featured in the top three for 32% of all respondents, a high percentage of these fans also place him as their outright favorite. Globally, he is the most popular, with 19.8% of all fans. Like Quartararo, his support is stronger among female fans, and he has ranked the top rider among fans aged 24-35.

Italy’s Francesco Bagnaia is ranked third in terms of popularity among fans worldwide, with Australian Jack Miller fourth. Bagnaia was the favorite of 11% of all respondents and is the most popular rider in Italy. What is notable in comparison with other series is that MotoGP™ fans are overwhelmingly ‘sport-first,’ with over 75% supporting a number of teams and riders rather than individual riders.

Monster Energy Yamaha MotoGP™ and Ducati Lenovo Team were voted the fans’ favorite teams, albeit with a tiny margin of 1.4% separating them. Repsol Honda was the third most popular and was the preferred choice among female respondents.

Fans identified the top five brand attributes of MotoGP™ in the survey: Exciting, Competitive, Entertaining, World Class, and Unpredictable, with 94% of fans saying that the sport provides exciting racing, 79% calling it the world’s most exciting racing, and 71% saying that it features pioneering technology.

James Allen, President of Motorsport Network: “A MotoGP™ fan survey on this scale has never been done before, and it has been truly fascinating to work on this huge project, following on from the highly successful global surveys we conducted recently for Formula One and INDYCAR. MotoGP™ is the dominant global motorbike racing championship, and I have loved it since I went as a child to see Barry Sheene and Kenny Roberts battle it out at Silverstone. The series has a lot of strong fundamentals in place, with a dedicated audience that is growing among female fans and across new territories of the world. There is clearly a great opportunity for the sport to unlock new audiences for this most thrilling and unpredictable of motorsport disciplines.”

MotoGP™ fans are keen race attendees, with over 40% having been to a live race in the past five years. An impressive 24% of fans have traveled to experience a non-domestic race. Over 60% of all MotoGP™ fans considered the Italian GP at Mugello critical to the calendar, making it the top-ranked race among fans; Assen (48%) and Phillip Island (37%) also scored strongly. Fans in the Netherlands are the most active race goers; with nearly three-quarters (73%) of Dutch fans attending a race in the past five years. Nearly three-quarters of all fans (74%) believe that MotoGP™ should feature more than 19 races in a season.

The survey also took a deep dive into media platforms and how fans consume the sport. Globally more than 82% of MotoGP™ fans watch 15 or more races each year, and TV still leads the way, with 90% of fans preferring it as the platform for watching live races, with over 60% of fans viewing TV over the race weekend.

Fan usage of the official MotoGP™ app is high at 41% worldwide, rising to 57% in the Americas. Outside of a race weekend, social media and dedicated motorsport websites become the most used platforms for information. During a race weekend, Instagram is the most used social media platform, driven by particularly high (75% ) usage among female fans and those aged 16-24.

In terms of the sporting format and possible future changes, fans strongly approve of the introduction of rules to balance the performance of less competitive manufacturers ( 60% net approval), particularly younger fans (16-34). The introduction of sustainable fuels is seen as a positive move for MotoGP™ ( 46% net support), with strong support among female respondents and younger fans aged 16-34. As for race duration, 85% of fans want races to last between 40 minutes and 1 hour; with 70% preferring a race distance of 40-50 minutes – the current length of a MotoGP™ race

The survey findings were revealed at the San Marino and Rimini Riviera Grand Prix at Misano.

For the complete survey, you can download the PDF https://global-motogp-fan-survey-2022.motorsportnetwork.com/

About MotoGP™ and Dorna Sports

MotoGP™ is the world's first motorsport World Championship, inaugurated in 1949. The best riders in the world compete on prototype, purpose-built motorcycles in 20 races a year across five continents, creating some of the closest racing on Earth. The sport welcomes millions of fans through the gates each year at the track and reaches nearly half a billion homes across more than 200 countries, enjoying a truly global fanbase.

Founded in 1988, Dorna Sports became the organizer of the FIM World Championship Grand Prix (MotoGP™) in 1991 and has been the exclusive commercial and television rights holder ever since. Based in Madrid, Spain, with premises in Barcelona and a subsidiary in Rome, the company is a leader in sports management, marketing, and media and has seen continued growth over the years; expanding its focus from solely MotoGP™ to include other leading motorcycle racing championships across the globe.

Motorsport Network is a digital technology company. Our platforms are visited every month by approximately 62 million dedicated users to buy, learn, be entertained, or simply feed their passion for cars and racing. We sit at the heart of the Racing and Automotive industries and provide authoritative thought leadership as well as unique experiences to our customers. We take them on a customer journey that encompasses news and insights, events, supercar shopping, tickets, games, and eSports, so we leverage the network effect to add value to their experience. We use our in-house technology and modern data tools to continuously test, learn, and improve. Our processes, content creation, and products are constantly evolving to better serve our audience, clients, and partners. For more information, visit Motorsport Network.

Nielsen Holdings plc (NYSE: NLSN) is a leading global data and analytics company that provides a holistic and objective understanding of the media industry. With offerings spanning audience measurement, audience outcomes, and content, Nielsen offers its clients and partners simple solutions to complex questions and optimizes the value of their investments and growth strategies. It is the only company that can offer de-duplicated cross-media audience measurement. Audience is EverythingTM to Nielsen and its clients, and Nielsen is committed to ensuring that every voice counts. An S&P 500 company, Nielsen offers measurement and analytics service in nearly 60 countries. Learn more at www.nielsen.com or www.nielsen.com/investors and connect with us on Twitter, LinkedIn, Facebook , and Instagram.