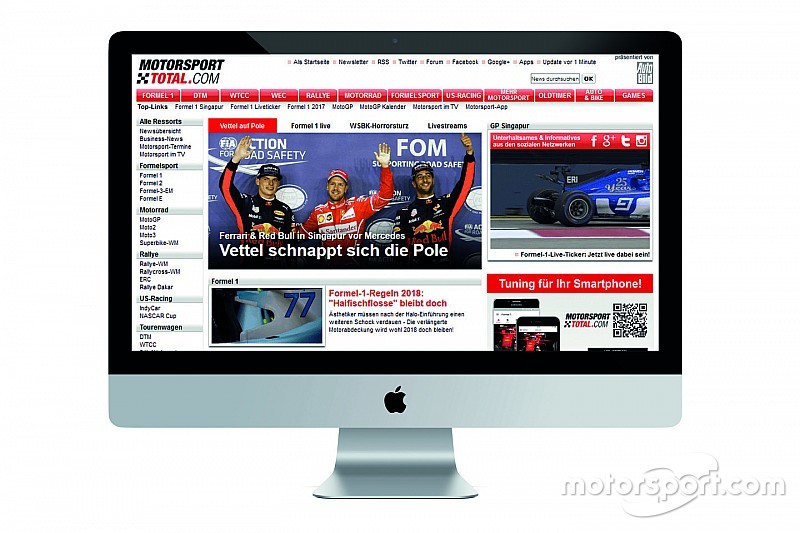 Motorsport Network made the acquisition by purchasing the company from its current shareholders including German publicly-traded technology and media company, SPORTTOTAL AG (ISIN: DE000A1EMG56).

“SPORTTOTAL AG and Motorsport Network have worked closely on a number of projects in recent times and we’ll continue to do so in the future,” Lauterbach said.


“We have a number of exciting opportunities ahead, not just in online properties but working with Motorsport Network to expand the footprint of Motorsport TV throughout Germany.”

The new expansion provides key benefits to the group and to the extensive German motorsport fan-base – Motorsport Network expanding its reach in this highly influential market and the German fans gaining access to the group’s massive pool of international content.

Motorsport.com and its parent company, Motorsport Network, have experienced rapid growth in the past two years to become the world’s largest independent automotive and motorsport-related digital platform connecting hundreds of millions of people that love motorsport and cars.

Germany is the home of some of the world’s leading automotive manufacturers including the VW Group (VW, Audi, Bentley, Bugatti, Lamborghini, Porsche, SEAT, Škoda, Ducati), BMW, Mercedes-Benz and Opel.

It has three drivers represented in the Formula 1 World Championship this year – including 2017 championship contender and four-time championship winner Sebastian Vettel.

“Our existing German edition of Motorsport.com will benefit greatly with the acquisition by adding some of best German talent in the sport to our team.

“In April of this year, Motorsport Network acquired Auto News Medien GmbH with its range of publishing interests including the leading German automotive website, Auto-News.de.

“We are set to launch a German edition of our automotive site Motor1.com next month and will be expanding Motorsport.tv into the region.”

The automotive industry in Germany is one of the largest employers in the world's fourth largest economy and is its largest industrial sector, with a turnover of EUR 404 billion in 2015.

“After two successful decades in the German-speaking market I am very excited about joining forces with Motorsport Network together with my great team,” said Fabian Hust, founder of Motorsport-Total.com.

“We’ll now be able to provide more news from around the globe, showcase highly rated content such as Giorgio Piola's F1 technical analysis and enhance our video offering through expanding Motorsport.tv into Germany which will be a huge win for our readers.