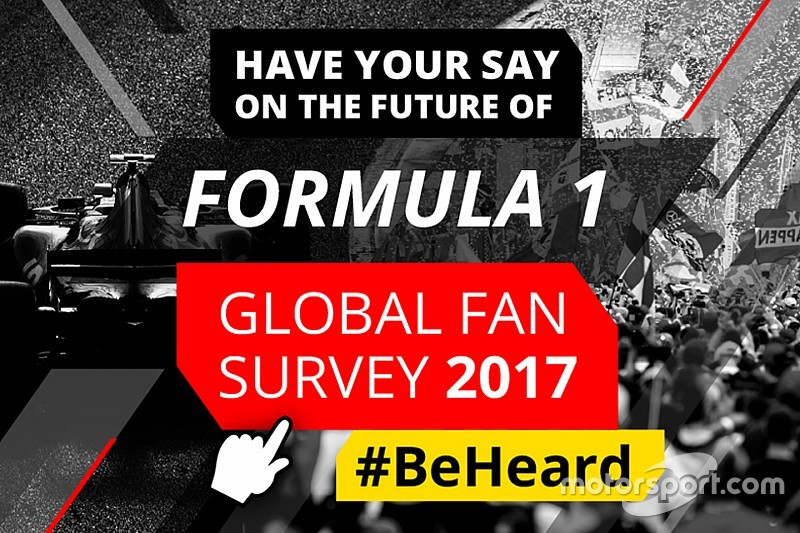 The world’s biggest digital motorsport platform builds on its previous work from 2015.

March 26, 2017, Miami, FL. Motorsport Network, the owner of Autosport, F1 Racing and Motorsport.com, today announced the launch of a second Global Fan Survey about Formula 1 to build on its record-breaking study in 2015.

The survey, which can be found at https://f1survey.motorsport.com, will be conducted in 15 languages to ensure the opinion reflects a genuinely international perspective.

The far-reaching survey of 2015 captured the opinion of 217,000 fans in 203 countries across a detailed range of Formula 1 subjects. That study – which was run in association with the Grand Prix Drivers’ Association (GPDA) and Repucom ­– remains the largest, most comprehensive survey of fan opinion ever undertaken by any sport and provided significant intelligence to help shape the future direction of Formula 1.

With Formula 1 having undergone a significant structural change and a transition of ownership in recent months, Motorsport Network believes the timing is right to garner fresh opinion from the sport’s global fan base, to aid and inform the sport’s future direction and enduring appeal.

With its multi-lingual, global reach, Motorsport Network provides the ideal hub to collect opinion and insight from fans to share with Formula 1’s followers, teams, drivers, media and the sport’s organisers. Nielsen Sports, the new owner of Repucom, who provided the analysis of the 2015 survey, will take charge of the independent survey reporting and validation.

The Global Fan Survey will be conducted for two weeks, starting from Sunday 26th March 2017, with the results being made available in May 2017. It is open to anyone over the age of 16.

F1 fans can ensure their voice is heard

Motorsport.com's Global Editor-in-Chief, Charles Bradley, said: “Engaged and passionate fans are crucial to the success of any sport, and F1 fans are the true consumers of what happens both on and off the track. Our work with the GPDA in 2015 provided unique and valuable insight to aid the sport’s rule-makers. As we enter a new era for Formula 1, we plan to employ all our global resources to provide fans with a single platform to ensure their voice is heard and their opinions captured and documented again.

“Motorsport.com, Autosport and F1 Racing have the capability and responsibility to work with fans around the world to provide a clear, coordinated message to the sport’s decision makers – be they teams, drivers, circuits, broadcasters or rights holders.ˮ

Nigel Geach, the Senior Vice President of Global Motorsport at Nielsen Sports commented: “In 2015, we broke new ground with a genuinely global fan sports survey. As a trusted advisor in sports and entertainment intelligence, we aim to go one step further and build on the amazing commitment shown by Formula 1 fans to offer us their heartfelt views on the sport they love.ˮ

He continued, “Our ongoing work with Motorsport Network significantly deepens our understanding of the marketplace and what fans care about and consider important. Over the coming weeks and months, we will be investigating the research findings further and, with Motorsport Network, plan to share these with fans and all those that have an interest in the enduring appeal of the sport.”