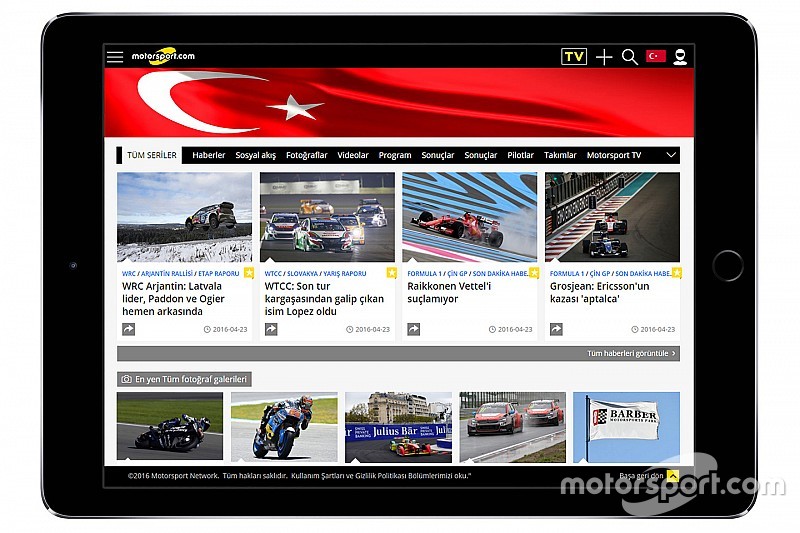 MIAMI – (April 26, 2016) – Motorsport.com, a Miami-based technology and digital media company, is expanding to Turkey through its acquisition of the country’s most-visited motorsports website, TurkiyeF1.com.

“I am truly honored by Motorsport.com’s decision to enter Turkey, which is one of the world’s most promising and developing countries,” said Cihangir Perperik, CEO, TurkiyeF1.com. “As TurkiyeF1.com, we have been trying to really hard to increase awareness and interest to motorsports in Turkey for nearly two decades. Now, with the combination of Motorsport.com’s amazing global network and rich content, combined with our experience in Turkey, we will be the dominant voice of everything motorsports in Turkey.”

Since 1998, TurkiyeF1.com has been the reference point for Turkish auto racing fans regarding F1 team news, races, drivers, videos and more. TurkiyeF1.com is a two-time winner of the ‘Altin Orumcek Web Award’ for the Turkey’s best websites for sports and automobile categories (2004 & 2005).

As one of Turkey’s most-trusted motorsports website, TurkiyeF1.com has attracted such Fortune 500 advertising partners as Shell, Vodafone, Bridgestone, Pirelli and more.

“Turkey is an important market for the further development of our company as we continue to target key socioeconomic regions, including their population of nearly 80 million, to support our global initiatives as the most-read motosports website in the world,” said Filippo Salza, president of Motorsport.com – Europe. “The emergence of Motorsport-TURKEY will provide Turkish race fans the highest level of F1, MotoGP, World Endurance Championship, World Rally Championship and more.”

Motorsport.com – TURKEY will go online in May 2016.